A trick I like to use to establish a better sense of fantasy and wonder in the campaign is to start things out very mundane and down to earth. Bandits will be humans rather than orcs. The owlbear stealing chickens from the local farm turns out to be a rival farmer in a makeshift costume. Magic is rare at first, and the real monsters wait quietly for the party to come to them, a bit later.

Certain monsters are so ubiquitous that using them is almost expected and doesn't do much to harm the mood of the game. Of course you wouldn't want a party of 1st level heroes actually challenging a dragon, but seeing one flying on the horizon at dusk, or hearing tales of his tyranny and gold lust are fine, even at basic level play. Orcs and goblins and kobolds (oh my!) shouldn't be overused, humans and demihumans are supposed to be the dominant races in the world, after all, but they can make appearances now and then without the DM screaming "THIS IS A FANTASY WORLD!" at the players. Remember, fantasy in the setting works best when you ease into it. Recall the wonder, excitement and trepidation of poor Bilbo Baggins as he ventures out into the world for the first time. Capture the wonder of Harry Potter as he prepares for his first term at Hogwarts school. The monsters, magic and epic tales of the setting will have a bigger impact on your players and be remembered longer and much more fondly if you build up to them. If you throw wave after wave of skeletons and zombies at the party from day one, there's no real thrill or shock when the BBEG (big bad evil guy, the primary villain in the campaign or campaign chapter) turns out to be a lich.

Consider as an example the Minotaur Cave encounter from B2: Keep on the Borderlands. This encounter, while fun and memorable, is flawed in two basic ways in my opinion. First, minotaurs are mythic, epic monsters, an encounter with one should be the climax of a lengthy quest involving a story reminiscent of the Greek tragedies from which the creature is borrowed. He shouldn't just be the pet and treasure keeper for a band of bugbears. Second, I think the purpose of the encounter, and the level of difficulty, can be just as easily fulfilled by replacing the minotaur with a bear. Use a Grizzly (or a Cave bear if you're feeling mean) and the encounter plays out similarly to the minotaur. The only difference in this case is that the bear wont have a reach/missile attack, so you might want to tweak the encounter area a bit to prevent characters from "shooting fish in a barrel" and picking him off from a safe distance.

This way, down the road when you have a great idea for an epic story arch that involves a minotaur, you haven't softened the impact of that creature. "Ho hum, another minotaur, let's get this over with".

I'm open to feedback and other ideas for maximizing use of the mundane and ubiquitous low level animals and monsters, so please use the comments below to chime in.

I'll leave you with a quote from Gary Gygax, from the aforementioned minotaur encounter in B2:

(the only options for escape are finding and using a secret door)... or else to run out of the place and climb a large tree.

Classic. I miss that kind of tongue in cheek humor in the game, WotC takes their D&D way too seriously.
Posted by Darva at Tuesday, September 19, 2017 No comments:

Campaign Mood - Portraying Character Knowledge vs. Player Knowledge. Or, how much DO commonfolk know about magic and monsters?

Being a fan of fantasy literature, folklore and mythology, I get tired of the default assumptions that have crept into the game over the years. Monsters everywhere, magic everywhere, and it's more than that, everyone recognizes and accepts them. Joe the farmer knows not only that those were goblins raiding his farm, but that the shaman was casting cause disease on his cows? Not in my world.

I'd have Joe tell the party a wild story about little evil green men that had fire in their eyes and smelled of the swamp. Not only did Joe's hounds flee from the beasts, but they refuse to come out from under the porch even now, a week later. One of the creatures spoke the vile language of the 9 hells themselves, and when he spoke to the cows, they fell ill with a wasting disease. Don't just drop the name and describe, describe the encounter the way a superstitious, uneducated, rather naive and terrified commoner would. Exaggerate things, make things up, omit important clues. Evil green midgets with flaming eyes that smell like a swamp? Who's going to guess its a mundane encounter like goblins? It brings a whole new level of depth and immersion to the game.

The same concept can be applied to magic, consider this:
Jane the barmaid: "That evil cleric cast cause blindness on me and robbed me!"
or
Jane: "He had a strange symbol on a chain around his neck, and was chanting in a language I don't know. Suddenly, everything went dark and I couldn't see! Gods help me, I don't know what I'd have done if the priest from down the road came along and spoke the words of Odin over me, bringing light back to the world!"

Strange symbols and weird languages is pretty vague, maybe a cleric of an evil god, maybe a magic user. Was Jane the victim of cause blindness or a darkness spell. Did the cleric cure blindness or dispel a continual darkness? The PCs could go interview the cleric and find out more, but that too can lead to more mystery and adventure.

Overall this serves to keep the story and role playing in the game, and avoid it just becoming a series of boring encounters with boring monsters. But what do the PCs, as well as the NPCs, know about the monsters and magic of their world? I suggest the following quick dice rolls to find out:

Chance to recognize a monster (either upon seeing it, based on what legends and tales one has heard, or guess what monster someone is describing):

PC Level + 1/2 INT score - Monster HD
Roll this number or lower on D20 for success
Remember that normal "men" (unclassed NPC commoners) are considered to be level 0 and have average INT (9).

Chance to recognize a that a spell is being cast (but not identify the spell)
PC Level +1/2 INT score - Spell Level
(Elves and MUs get their full INT score added to their level when facing spells of their own type, likewise with Clerics when facing a clerical spell being cast)

Chance to identify a spell being cast (Only if the character has potential access to the spell in question; ie. it's in their class spell list)
PC Level + 1/2 INT score - Spell Level
Non spell casters can attempt this, but with no INT modifier, a simple PC Level - Spell level check is made.

Always round down, and note that on all these checks, there is no auto success if a natural 1 is thrown. A zero level commoner with 9 int trying to identify a 4 HD monster (0 + 4 - 4 = 0) has 0 chance of success. However, to preserve mystery (PC "well, darn, I rolled 19, this sucker must be at least 8 HD!"), the roll should always be made. 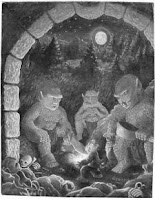 The exception to the rule:


But they were trolls. Obviously trolls. Even Bilbo, in spite of his sheltered life, could see that: from the great heavy faces of them, and their size, and the shape of their legs, not to mention their language, which was not drawing-room fashion at all, at all. - JRR Tolkien, The Hobbit

Obviously, in your campaign, some monsters and magic are so ubiquitous that almost anyone will recognize them.

Who in their right mind wouldn't be able to correctly state that the evil magic user cast a fireball? Or that the goodly cleric cast a light spell to guide the lost children through the dark forest?

And of course, everyone knows what a dragon looks like. They're iconic and hard to miss. But a wyvern? A pterodactyl? Either of these creatures might be easily mistaken for a baby dragon by the naive.

A little discretion and common sense on the DM's part can go a long way.
Posted by Darva at Tuesday, September 19, 2017 2 comments: