The Classic D&D game never delved much into the details of a cleric's faith. The basic rules even state the following. 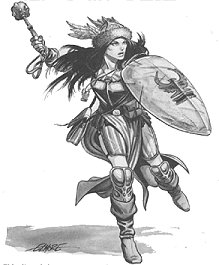 "In D&D games, as in real life, people have ethical and theological beliefs. This game does not deal with those beliefs. All characters are assumed to have them, and they do not affect the game. They can be assumed, just as eating, resting and other activities are assumed, and should not become part of the tame.


A Cleric's spell powers come from the strength of the Cleric's beliefs..."


The DM's book isn't quite as strict.

You may choose to add flavor to your games by adding mythological deities. The characters would be followers of such beings, and a cleric could serve a specific deity. However, all such activities are assumed, and should not influence play or change the rules in any way. No deity would react to the actions of any individual character, nor offer any special help.


The deities of the game characters may be similar to the mythological gods and goddesses of days long past. The ancient Greeks, for example, worshipped many gods; Zeus, Apollo, Poseidon, and so forth. According to legend, these gods would grant favors to their worshippers, and that is one way to explain the magic spells a cleric character can cast in the game.


The DM should be careful not to needlessly offend players, and current beliefs should be avoided."


Still not too encouraging, but I keep in mind that this was written in the 1980s, when there was a strong backlash against RPGs and D&D in particular by religious fundamentalists. It was probably prudent to keep any appearance of encouraging "pagan" religions out of the game at that time.

Having said that, it is perfectly acceptable to play the game that way, with no real thought given to whom or what a Cleric gets spells from. Especially in a true old school style game where role-play, let's be honest, takes a back seat to hack & slash and traps and dungeon crawling, it doesn't really matter that much.

Some of us prefer a different approach, where some details of the Cleric's faith are presented, to encourage story telling and role playing. Later editions of the game, and the various other settings deal with this in varying degrees of depth, but what about the Known World?

Although the Known World dates back to the B/X Expert set, and some of the adventure modules that came before BECMI, Frank Mentzer really began to integrate the setting into the rules, and it's usually considered the default setting for the game. The problem with this is, the setting seems chained to Frank's statement that the gods of the setting should not be detailed, and alas, they are not, at any point.

The Master and Immortal rules introduced options for characters to become Immortals, somewhat god-like beings with abilities far beyond those of mortals. While not quite gods, these beings are the closest thing TSR published for the setting, and various products later on treated various NPC Immortals as the figures of religious worship in the Known World.

That's fine, but while some of the nations and realms, especially those of the Hollow World subsetting, got a pretty treatment in the Immortals department, others got almost none. So we either use the published Immortals and fill in the gaps, or ignore them and use something else, maybe borrowing a pantheon from mythology or from another campaign setting. There's nothing wrong with this at all, and if you favor a certain mythos your game will definitely benefit from using it, but I wanted something a little more unique to the Known World, so I started looking at what I have to work with.

In the D&D game, the first real defining factor in a character's moral and ethical outlook is of course alignment. You could, I suppose, just use the three alignments as the overarching religions of the campaign, but this doesn't give much room for creativity, and leads to the old questions about whether or not all Lawful people act and think the same way. Probably not, if you ask me.

Then it struck me, the five spheres of power! Frank introduced these five basic components of the multiverse to present the various paths a PC can take toward gaining immortality. The Immortals mentioned in other Known World sources all assign one of the spheres of power to each of them. This gives us five basic religions, one tied to each sphere of power.

The Spheres of Power are not gods though. They are concepts, universal truths that allow an understanding of the multiverse and how things in it work. Through understanding and study beyond the grasp of most of his peers, the Cleric learns how to channel his devotion and knowledge of his sphere of choice into the subtle manipulations of reality that other mortals call divine magic.

But that's only 5 options, not a whole lot better than 3, right? Yes, and no. No, because once we have the basic five religions, we can diversify them and flesh them out as much as we want, with Immortals! While not gods, technically, the Immortals serve as saint like figures, epitomizing some aspect of the Sphere's ideals. The PC Cleric's religion is his sphere, but he can belong to a faction or sect that reveres a specific Immortal, if the player wants some more depth and backstory.

This also gives us the chance to meddle with the Immortals the publish material provides. Just because Alphaks is a published Immortal, the Clerics of his sphere (which happens to be Energy) don't need to worship him, and the NPCs the party runs into don't either if you don't want to introduce him. But if some pesky player points out that he's in this or that sourcebook, you can just say "he's not that popular in these parts", and plan some future encounter to satisfy that player's desire to involve him in the campaign. You can also introduce any new Immortals you like, either from your own imagination, or by borrowing deities and demigods from other settings or game systems.

Here's a thumbnail view of each sphere's ideals, and how they relate to each other.

In the Known World, the five sphere's of power are:
Matter
Energy
Time
Thought
Entropy

A Cleric PC chooses which one to devote himself to, but this does not mean he totally forsakes or disbelieves in the others. The wise understand that all five are key ingredients in the multiverse, and without any one of them, life as it is known in the  Known World would not be. The 5 sphere's are represented with a pentacle, like this: 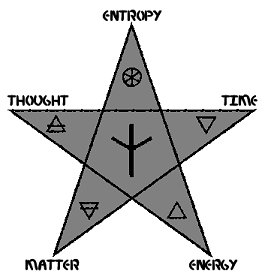 Each of the five points represents one of the spheres, and depicts the traditional rune used as a symbol for that sphere/faith. The kind of cruciform rune in the center symbolizes man (or demi-man) or existence and also designates which direction the pentacle is oriented in. All the spheres are considered equal and no one direction is considered up or down, or superior to the others, the only reason for this calibration feature is the fact that the runes for the spheres can become confusing if turned or inverted. This matters because a Cleric makes the pentacle his holy symbol by orienting it with his sphere of devotion pointing up. This is how Clerics of the different spheres recognize each other.

Here's a quick overview of the five spheres.

Matter: This sphere is related to the element of earch, and represents resilience, stability and longevity. Tradition and ancestry are important to followers of this sphere, as well as birth and growth, where the old matter lost to entropy is seen as being reclaimed and shaped into something new. Matter is tied to the Lawful alignment primarily, and favors fighters and dwarves among the PC classes and race. Matter is opposed to time, energy and entropy.

Energy: Energy is embodied in fire and represents activity, change and imagination. Free thinkers and revolutionaries are often followers of this sphere, as well as those with quick tempers or bad attitudes. Energy is tied to the Chaotic alignment, and favors magic users and elves. Most practitioners of arcane magic pay at least lip service to this sphere and its Immortals. Energy is opposed to matter, thought and time.

Time: This sphere manifests in water, as the running of rivers and tides of the seas are seen as the clocks of the multiverse, eternally ticking off life's fleeting moments. Time encourages change, but change with planning and set goals, as opposed to the chaotic whims of Energy or the destructive forces of entropy. Time is tied to the Neutral Alignment, and favors Halflings. The sphere is opposed to matter, energy and entropy.

Thought: Thought is represented by air, without which there is no life (for most thinking creatures, anyway). The sphere symbolizes learning, philosophy, understanding and truth. Followers of this sphere are curious and yearn for knowledge. Though tied to no alignment, Thought favors the thief class, and is opposed to energy and entropy.

Entropy: Entropy is darkness, chaos and death, and not tied to any physical element, but considered a spirit element that pervades all things, causing disorder, sickness, weakness and death. Disciples of entropy understand, however, that these things are a necessary part of the natural order of things, and are not always evil minded. Entropy favors no PC class above others, but is tied to the Chaotic alignment. Entropy opposes all other spheres.

A note about druids and shamans. 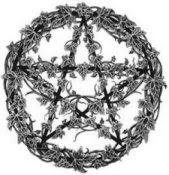 Unlike Clerics, druids revere all five spheres equally, finding truth in the natural world that results from the mingling of all the spheres. To denote this, they usually adopt a featureless pentacle, meant to symbolize the blind equality of each aspect of existence.

Shamans, on the other hand, coming from societies with more primitive (though not necessarily inferior) understandings of the world, do not follow the spheres directly. Instead they gain their spells through worship and reverence of totemic spirits, usually representing animals, plants, landmarks or ancestors important to their people. These totem spirits are treated as Immortals, usually of the matter, time or thought spheres, for all intents and purposes here.

Most commonfolk don't pay much mind to the lofty ideas of spheres and multiversal truths, and will tend to follow a group of Immortals and/or spirits relevant to their location and life.

Just as Clerics of one sphere do not necessarily disbelieve or hate the teachings of the other spheres, most, if not all, churches represent all five spheres. One (or more) may be more dominant in the local dogma than others, but in most cases no follower of any sphere is turned away. Churches also tend to build doctrine heavily around the Immortals of their favored sphere(s).

That sums up the basics, let me know what you think. Like I said, I'll go into each sphere and its followers and Immortals in separate posts in the near future.

I hope it isn't an issue for anyone here, but let me state flat out, the use of the pentacle/pentagram here is for entirely fictitious depiction of concepts in a fantasy campaign. I do not intend to insult or offend the beliefs of any pagan ideologies that invoke the pentacle symbolism.
Posted by Darva at Sunday, October 01, 2017 1 comment: