House Rules - Some Basic Skills Every Spellcaster Should Have, Without Needing to Waste a Spell

The Classic D&D game grants a lot of abilities to magic users through their spells, including a few I think should be learned skills, not requiring the casting of a spell to perform. Among these are the abilities to read magic, detect magic and identify magic items.

Hold up though, I'm not just going to give every 1st level magic user, elf or wicca the power to perform these activities any time they wish with a 100% success rate! Like the class skills of the thief, these skills start out weak and undependable, and increase in reliability as the magic user progresses in levels.

At the DM's option, clerics, druids and shamans may gain similar abilities, restricted to the magical writings, spell effects and items accessible by their class.


Some notes on the table: 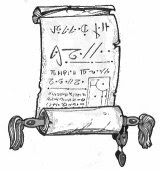 Read Magic: All magic users are taught to write in magical code, so it makes no sense to me that interpreting the magical code of other spellcasters would be so difficult as to require using a spell. There is one important factor to keep in mind, however, since this skill is just a learned ability, not a spell or imbued magical power, it's not without flaw. The magic user must be conversant in the base language used to write the magical code. For example, William is a scottish magic user who drafts his scrolls in Gaelic. For Pierre, a french magic user, to be able to decipher William's scrolls using this skill, he must also have some skill in the Gaelic language. If not, the read magic spell, as presented in the Basic rules, is still available, and without the chance of failure. A result of (1)00 on the skill check is an abject failure and may provide flawed translations, while a roll of 01 is a decisive success and may grant additional information, DM's fiat.

Detect Magic: Another skill that is so innate to being a magic user that it seems illogical to have to 'waste' a spell performing. Almost all fantasy fiction I've read includes some reference, minor or otherwise, to aura-reading by practitioners of magic. Granted though, from the point of view of a spellcaster, all creatures (and perhaps all living things, including plants, depending on the mythos) are inherently magical, so the chance of failure here reflects the magic user's improving ability to accurately interpret the difference between 'ambient' magic and items or creatures that are actually enchanted. A result of (1)00 on the skill check is an abject failure and may provide false readings, while a roll of 01 is a decisive success and may grant additional information, such as a hint at the nature of the enchantment, DM's fiat. Once again, if a magic user needs a 100% accurate reading, the Detect Magic Spell is still available.

Identify Magic: Through his studies to become a magic user, and further training to advance in level, the magic user surely picks up a vast array of trivial knowledge related to the craft. These seemingly useless (at the time one learns them) bits of lore can later come in handy when trying to determine the nature, history and powers of a magical item. However, this should not be treated as a 100% accurate, "read the item's entry in the rule book" style identification of the item. Instead, we take a little inspiration from the AD&D 2nd edition Complete Bard's Handbook. Upon acquiring a new magical item, the magic user may spend 1d2 hours studying it, checking his notes, jogging his memory, etc. Then a skill check is made, and each successful use of this skill should reveal one of the following bits of information:
Whether item is intelligent, Whether items is cursed/evil, Item's name, Famous past owners, Age of item, Where it was made, Who crafted it, Who can use it (Class, Race or Alignment restrictions), General effects (described as 'creates a blazing inferno' or 'shoots deadly bolts of magical force' instead of 'fireball' or 'magic missile', for example), How to activate it (Command Words, etc)

Each bit of information gleaned provides a +5% bonus to subsequent rolls, but once a check is failed, no further attempts to identify that item may be made until the Magic User or Elf has Gained a level of experience.

As always, if the magic user needs a fast or 100% accurate identification of an item, the use of the Analyze or Lore spells or a Slate of Identification, or hiring of an NPC sage with access to either one, is available as normal.

A note on the use of these abilities by Elf class PCs:
Whenever fiddling with the rules related to magic users, I'm forced to weigh the impact of the changes on the elf class as well. In general, I either deny the tweaks to the elves, or limit them in some way to keep the magic user a viable class in light of the elf's added martial prowess.
In this case, I allow elves access to these skills, but they are treated as being two levels lower in experience when consulting the chart, which also means that they have an actual rating of 0% success on the charts until attaining 3rd level. However, since each skill notes that a roll of 01 is always a success, 1st and 2nd level elves have a base 1% chance of success with all three skills.
Posted by Darva at Friday, September 29, 2017 3 comments:

In the spirit of supporting OSR retroclone publishers, and adding cool ideas to BECMI, I've decided to examine each of the games, and grab at least one idea to tweak for use in a BECMI game.

This timeI look at Caverns & Cavaliers, by WeaselFierce (Free PDF Download, Link:http://weaselfierce.webs.com/roleplaying.htm). WF introduces an interesting idea called Traits, whereby every few levels, a player can choose from a list of bonus abilities to add on top of the normal class abilities. In C&C, this serves somewhat of a custom class builder option, since the base classes are a bit more barebones than in BECMI, but the abilities are fun and minor enough to use without ruining game balance.

I suggest allowing the player to choose one Trait every 5 levels, including level 1 (so, levels 1,5,10,15,20,25,20,35) from the following list. The DM may add or remove abilities from the list as he sees fit for his campaign.

Caverns & Cavaliers offers a bunch of other interesting ideas, such as custom class templates and advanced classes for experienced characters, it's definitely worth downloading and taking a look.
Posted by Darva at Friday, September 29, 2017 No comments: