In Classic D&D, and pre-AD&D Mystara, druids are powerful clerics, given to the protection of the natural world. Unlike druids in other incarnations of the game, Known World druids have a respectable career as a cleric already behind them, and should be capable of great works of faith-magic. Sadly, the material for the setting reveals few examples of this, leaving druid magic as an afterthought unless a PC decides to take that path as their cleric rises in level.

With that in mind, I decided to share a couple examples of druid magic from my home game, in the form of magic items so they can be used by lower level PCs, or in campaigns where the druid class isn't used.

Laoreigh's Brooch
A few centuries ago, before the explorations of Karameikos by the Thyatians began, the area had grown wild and untamed after long years of Traladaran collapse. Many of the small bands of humans struggling to survive in the wilderlands looked to their druids as protection from the dangers of the woodlands, and the farmers subsisting on the shores of Lake Windrush, in the shadow of the ruins of Castle Gygar were no exception, often seeking the aid and counsel of the cicle of druids who lived in the hills near modern Eltan's Spring.

One of druids, a kindly old woman named Laoreigh had quite a reputation in the area for being a master of plant lore and was esteemed for her skill in healing the unfortunate souls who fell victim to rashes or illnesses from contact with some of the nastier flowers and herbs found around the lake. Laoreigh was no glory hound, and demanded no payment or honors from her neighbors for her aid, and having no skilled student to carry on her work, she crafted the magical brooch that bears her name in hopes that it would be used to soothe the suffering of future peaceful folks.

In the time since, the druids of the Eltan's Spring circle, created a few copies of Laoreigh's brooch, one of which is kept by the druid Bertrak, the soul remaining druid of the Eltan's Spring circle. If the party participates in the adventure "The Sound of Madness" from the Karameikos: Kingdom of Adventure box set, or in some other way performs noble deeds in the service or alliance of Bertrak, he may bestow the brooch upon one of them as a reward. The other brooches, including the original, have faded into the fog of history, and their current whereabouts are unknown. 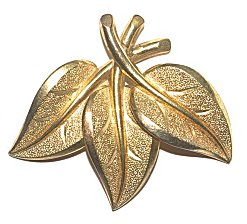 Laoreigh's Brooch is made of brass in the shape of a fan of three leaves of the pixie's tear, a rare herb sometimes found in the wooded hills around lake windrush.The trinket is about an inch tall and an inch and a half wide, with a thickness of about a quarter inch. The replicas are sometime made of bronze or copper, but are otherwise identical and bear the same magic.

Those of neutral alignment who wear the brooch displayed openly are entitled to a +1 bonus to reaction checks when encountering druids, this bonus increases to +2 if the wearer has the original item and not a replica.

Bertrak does not know the process for creating these items, but a PC druid who earns his trust and access to the hidden "vault" (actually just a well concealed cave near his grove) where he has stashed most of the relics and records of his circle will be able to do so given 1d4 months of study and creation time.

Rod of the Windrush
In the dry summer months of north-eastern Karameikos, wildfires are a constant danger, threatening the farms and homes of the folk who live there. In the infamous summer of AC 873 in fact, the town of Threshold was nearly wiped from the world when a savage fire roared down from the hills to the east and engulfed the town, destroying most of the buildings and claiming hundreds of lives.

During the rebuilding effort, Flindemar, then leader of the Eltan's Spring druid circle, who had all assisted in the doomed effort to fight the fire, presented the mayor of the town with a bundle of Windrushes, the the ubiquitous reed that grows along the shores of the lake and gives it its name, woven into the shape of a stout rod and magically preserved and hardened to a stone like strength. Flindemar promised that the rod would ba a great boon to fighting future fires. The mayor and his successors treasured the rod, and kept it safely in the town's vaults when it wasn't needed.

Sadly though, when the town came, albeit peacefully, to be under the rule of the Karameikos dukes, a wave of crime temporarily swept through Threshold, and even the old city vaults were plundered at least three times. During one of these raids, the rod vanished, and its current owner and whereabouts are unknown.

The Rod of the Windrush may be used by any druid, or a cleric of L or N alignment, presumably to aid in fighting fires, but in actuality any time its power may be useful.

Once per day, the Rod may duplicate the Create Water spell as a 14th level cleric with the exception that the water source may be created floating in the air and has a range of up to 100 feet from the caster instead of the normal parameters.

In addition, up to three times per day, it may also protect the bearer according to the Resist Fire spell.

Note: Do not repost or redistribute this material on any forum, website, archive or social media without express prior consent from the author.
Posted by Darva at Saturday, September 23, 2017 No comments: