Whatever poor soul first kept his share of the day's hunt too close to the campfire and happily discovered that putting a char to a piece of meat vastly improves its taste is sadly lost to the fog of prehistory, but in the Shirelands, every Hin worth his or her toehair knows the name Blossom Goldenspoon.

Long ago, in the days when the Hin first learned to tend their fields and keep pantries, cooking became the high art that it is today. One of the earliest, and still most revered Hin cooks of this time was Blossom Goldenspoon. A creative genious in her kitchen, Blossom is still credited with first creating most of the foundations of every Hin's recipe collection, and in fact, telling a Hin that her dish "could've come straight from Blossom's hearth" is considered a compliment of the highest order.

With success often comes the envy of others, and such was the case for Blossom. Many of her peers sought to outdo her skill, and at least one stooped to magical cheating to help, but as the Hin like to say "ye eat what ye cook"...

Cotter Bramblepatch was a well intentioned apprentice cook, at first desiring only to win the praise of his clan by feeding them the best meals he could muster, but he had the misfortune of living in the same town as Blossom, and grew weary of hearing his dishes compared to hers, never favorably, mind you. Frustrated, he traveled east, to visit the Traladara folk and hoped to learn new culinary secrets that would impress his kinfolk.

Cotter was quickly dismayed at the fact that Human cookery was far inferior to that of the Hin. He had almost given up on his quest when he met a a young Traladaran magic user who promised to help him achieve his goal in exchange for 10 years of service as the magician's personal cook. You see, although Cotter's skills in the kitchen didn't wow his peers, to a human, his dishes were divine. He faithfully completed his decade of service, at the end of which, his master presented him with a fine silver soup bowl, "Cotter, my lad" the old magician said, "any you serve from this vessel will find it the grandest meal they've ever eaten." Cotter took the bowl skeptically and returned home to the Shires.

The grandest meals ever, indeed. Hin flocked from miles around to have a taste from the table of Cotter Bramblepatch! Word around Eastshire, and beyond, spoke of meals fit for the Immortals themselves, selflessly offered to any who came asking. Cotter reveled in his newfound fame.

Cotter's soup bowl, enchanted by his Traladaran friend, whose name is not known in these tales, did exactly as promised, every meal served from it was thought to be the finest that diner had ever tasted! So great was its power that even burnt, spoiled and rotten dishes were greedily slurped up, to the very last drop or scrap. The bowl's power proved to be Cotter's downfall in the end.

Cotter was very generous, far preferring fame and praise to coin, but after a while, his money purse ran low and he could no longer afford fresh, wholesome ingredients for his recipes. You probably see the bowl's folly already. Although a dish served from it tastes like the finest fare one has ever eaten, the actual quality of the food is not affected at all. Thus, a meal that is burnt, undercooked, spoiled, or even poisoned will still cause heartburn, sickness or even death to those consuming such tainted fare.

Thus it was that Cotter's peers began to question his methods, despite enjoying his meals as usual, and continuing to praise his skill, quiet doubts began to accompany the cramps and achy bellies that were sure to follow. Colter himself eventually used the bowl to liven up some improperly preserved salted pork loin one lonely and hungry afternoon, and lacking a competent healer nearby, died from food poisoning the very next day. 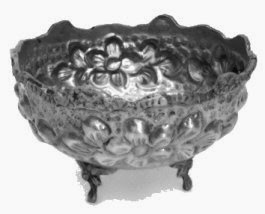 Poor Man's Feast (aka Cotter's Bowl)
Cotter's bowl is a footed soup bowl crafted from fine silver beaten into a pattern of flowers and knotwork. The dish always feels comfortably warm to the touch, with a faint aroma that most who have examined it describe as fondly reminiscent of "mum's own kitchen".

Any food or drink placed into the dish and then served will taste to those eating or drinking like the single greatest thing they've ever had the luck to experience. Even the coldest campfire gruel will seem to be a meal fit for a king, and the foul tastes of minor spoilage, weevil infestations and the like will become undetectable.

The downside of using the bowl is obvious from Cotter's tale. Poisons in the food or drink in the bowl become extremely difficult to detect, gaining a 50% chance (1 or 2 on a d4 roll) of evading notice by magics intended to detect poison.

Also, because the user is so fooled by the pleasant taste of the fare from the bowl, he will tend to gobble or slurp up the very last bit, making it more difficult to avoid the ill effects of a poison one would normally spit out due to the foul taste. All creatures poisoned by fare from the bowl receive a -2 penalty to their saving throw against that poison.