We like to give some variety to locks and traps, to make things a little more interesting than the old "ok, roll to unlock/disarm it". While intricate detail of the workings of the device is overkill in most cases, I found that a simple system to differentiate the quality of various devices doesn't slow things down too much. Here's what I came up with. 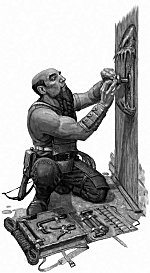 In addition, I came up with a system allowing for multiple attempts at picking a single lock. By the book, if the thief fails the first attempt, he must wait until he gains another experience level before attempting it again. This is a little unreasonable, in my opinion.

In the standard rules all attacks with a bow do 1d6 points of damage. I wanted to add a little variety for characters who use bows heavily, as well as give the DM some options to use with NPCs and monsters who make use of archery in combat, so here's a collection of new arrows I devised to give your archers a little more flexibility. Enjoy.

Bone Tipped Arrow : 1d4
Used mostly by primitive cultures, including those of humanoids like Goblins and Kobolds, this arrow costs of a 3 or 4 inch long sliver of bone strapped to the end of the arrow's shaft. It's ineffective against any armor heavy than studded leather, causing armored opponents to simply ignore the attack, unless the archer takes a -4 called shot penalty to his attack roll to aim for an unprotected part of the body (if any, DM's discretion).
Cost : 1cp each

Stone Tipped Arrow: 1d6-1
Also used mainly by primitve peoples, this arrow is fitted with a head made of stone chipped into a suitable shape. The major improvement from bone arrows is that this variety can be effective against heavier armors.
Cost : 2cp

Sheaf Arrow : 1d6+1, -1 to hit
A thicker shaft and heavier head reduce the accuracy of this arrow, but give it a higher damage potential than the standard arrow.
Cost : 1sp

Whistling (or Screaming) Arrow : 1d6
Forces a moral check against creatures with WIS of 10 or lower carved channels in the shaft caused the arrow to spin on its horizontal axis, creating a high pitched screaming sound easily heard up to 1000 yards away
Cost : 5sp

Flare (or Flame) Arrow : 1d6
Causes additional 1d4 points fire damage if target fails a save vs. breath. Often used in the field by rangers and soldiers by shooting them straight up, hence the flare name.
Cost : 1gp

Stinger (Ceramic Hollow Tipped) Arrow : 1d6-2
May be filled acid or poison that is released on impact. these arrows shatter on impact and cannot be reused.
Cost : 1pp (does not include cost of acid or poison if used)


Frog Crotch Arrow : 1 point damage, Not very effective as a weapon, -4 to hit (generally against AC 10, but DM's discretion applies)
Successful hit allows the archer to cut ropes and cords. Used often by recon type rangers and archers involved in siege situations. The name is taken from the old 1E Oriental Adventures book, so don't blame me if it sounds a bit crude. The name is derived from the shape of the head, sort of a rounded v with the open end facing forward and sharpened along the inside edges, the arrow catches the rope and severs it.
Cost : 1gp

Posted by Darva at Thursday, September 21, 2017 No comments:

Olga is a member of my game group and a dear family friend. When I can coax her into writing a guest post, i'll feature them here, with minimal editing.
~Darva

I notice that many later editions of D&D and its variants, either officially or as an assumed unwritten rule, don't treat 0 hit points as dead, as it is written in the Basic Rules. Systems seem to vary on what negative hit point total means actual death, but 0 or lower HP just seems to mean the PC (but oddly enough, not the NPCs or monsters, go figure) is simply unconscious and bleeding, sure to die if help is not given by a comrade quickly.

The Hackmaster RPG (4th edition, the AD&D 1st ed. "clone" parody) takes a different approach, granting every PC, NPC and monster a HP "kicker", 10 extra hit points for everyone. While I don't like shaking up the rules to that extent, and further dragging out low level combat as 1st level PCs and low HD monsters literally hack each other to pieces attempting to deal 14 to 118 points of damage, I do like that at least the system is fair to the DM's cast of characters and creatures, <b>everybody</b> gets the 10 bonus points.

The compromise system I came up with follows the basic idea of the 0 HP means unconscious rules, while incorporating a little of the Hackmaster rule spirit as well. Here's my proposed Death's Door rule:

At 0 HP, a PC or NPC is unconscious, and dying from bleeding, even if that bleeding is internal, from blunt melee weapons. The character will lose 1 HP per game round unless healing is given by an ally through magic or successful use of a healing skill, if you use those options. If the character's HP total falls below -(1+CON Adj)*, he is dead.

If the character is returned to 1 HP or higher through healing, he must make a saving throw vs. Death or permanently lose 1 point of CON ability score. This loss of ability score does <b>not</b> retroactively affect the character's hit point total, but will affect future HP gained at level up if the characters CON score adjustment changes.

That's for PCs and "named" NPCs, the DM's cast of characters that are more than just bystanders or riffraff using the Normal Human, Elf, Dwarf, etc monster descriptions. Monsters do not gain the death's door option, they are still dead at 0 HP, but instead, they get a 1 HP per HD kicker, always rounded up. So a Kobold or Goblin gets 1 extra hit point, while a 10 HD Dragon gets 10 extra HP. I think this balances things out ok without forcing the DM to keep track of half a dozen or more unconscious and dying monsters during an encounter.

* As shown on page 36 of the Basic Set, characters with a high Constitution score get an adjustment to their HP. This is the ability score adjustment I'm talking about. +1 for a score of 13-15, +2 for 16-17 or +3 for a score of 18 or higher. A character with a 17 CON can therefore fall to -4 (1+ +3 con adj) HP before actually dying. Negative Con. adj for a low ability score are ignored for this purpose.
Posted by Unknown at Thursday, September 21, 2017 No comments: