Magic-users and Elves aren't the only characters in the game who cast spells, of course, Clerics get important spell abilities when they reach 2nd level of experience. Somewhat unlike the former casters, the Cleric's spells are critical to the success of the entire party, healing and protecting the Cleric's allies when things get tough.

Since the rules are not totally clear, many players interpret them to suggest that Clerics get to choose their spells on the fly, not needing to memorize them daily like MUs do. I personally don't like this. Like the Elf, the Cleric gets spells and pretty respectable combat prowess, so why further punish the player who picks a MU by only applying the "Vancian" rule to them? Given that thought, I require Clerics to pick their spells daily just like their MU compatriots, with the caveat that, as in later versions of d20 D&D, they can swap out a prepared spell for a healing spell of equal or lesser level on the fly, provided they succeed on a wisdom check (equal or less than their WIS on a d20 roll) at the time of casting.

But, you might point out, these posts are all about getting around Vancian spellcasting! Right, and Clerics get similar options.

Clerics* who cast their spells on the fly without daily prayer and preparation suffer the same penalties to their initiative as MUs do; -1 to individual initiative per spell level of the desired spell.

Like MUs, the player may choose to use material components to remove the initiative penalty, in the exact same way as MUs. The only real difference is that in addition to the optional spell component, the Cleric must always have their holy symbol during spellcasting, or the spell fails. Of course, a lenient DM may take mercy on the Cleric whose symbol is lost or destroyed through no fault of their own, allowing them to perform a WIS check, with a +2 penalty to the roll, to cast spells without their symbol, as long as an effort is being made to replace it ASAP. 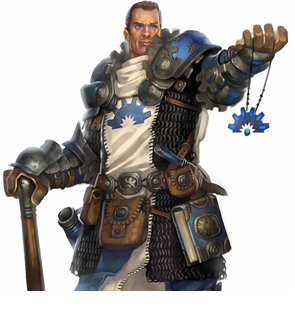 The power of Gygax compels you!

The required components for each spell are similar in nature to their MU spell counterparts, but the Cleric player who wants to swap out for non-standard components should take their particular deities dogma into account. While a god of nature and peace would be fine with a bundle of fresh herbs being used to invoke a Cure Light Wounds spell, for example, a savage god of war might prefer the heart of a freshly killed enemy. DM discretion rules the day, as usual, in regard to work works and what does not.

Here are my suggested components for the official Basic Rules 1st level cleric spells, to get your creative juices flowing:

SPELL - COMPONENT (Symbolism)
1a Cure Light Wounds - 1 vial of holy water (considered to contain the divine essence of the patron god)
1b Cause Light Wounds - small chunk of metal, wood or stone from a broken weapon (to invoke the now inert damaging potential or bloodlust of that weapon)
2a Detect Evil - the preserved eye of an animal considered in the Cleric's culture to be friendly or "good", like a domestic breed of dog, songbird, sheep, etc (most cultures acknowledge the enhanced senses of animals)
2b Detect Good - as for Detect Evil, but from a bad or evil animal, like a snake, rat or pirahna (same as Detect Evil)
3 Detect Magic - the preserved eye of a cat, raven or crow (these animals have a strong symbolic connection to wizards and witches)
4a Light - a live or preserved firefly (a creature thought to be sent by the gods to guide their faithful in the darkness)
4b Darkness - a preserved wing (or freshly harvested one) of a bat (bats are known to "see" and fly straight in the darkness, after all)
5 Protection from Evil - 1 vial of holy water (to invoke the essence of the god for divine protection)
6 Purify Food and Water - A handful of salt (often used to preserve food, salt is thought by Clerics to have divine properties that drive off rot and decay)
7a Remove Fear - a small children's doll (to recapture soothing memories of home and security)
7b Cause Fear - the preserved head of a snake or other nasty small animal (the fact that most sane folk fear and avoid snakes leads Clerics to believe the gods mark those creatures with a fearsome aura to warn us of their danger)
8 Resist Cold - a chunk of coal or sulphur, unburnt (to invoke the latent flame spirits thought to live within)

I suggest giving Cleric players a lot of flexibility in choosing alternate materials to substitute, as long as the player is making some creative effort to play out the faith of her PC. While some MU types, though not so much Elves, consider magic to be a rather exact science, Clerics view divine magic as the malleable will of their patron god, infinitely adaptable to intent and circumstance.

With these notes and the guidelines from the MU article before them, you should be able to freely add these options to all the spellcasters in your game without too much difficulty or bogging down of play, all that is really required is a bit of creativity and some minor bookkeeping by the players.

*Clerics, in the context of this article, include Druids and Shamans, and any other variant classes (such as an OD&D paladin, perhaps) with similar divine or spiritual magical abilities.