One part of playing a spellcaster in AD&D, either 1st or 2nd edition, that I've always found fun is the use of material components for casting a spell. For those unfamiliar with the idea, it basically means that most spells require a little bit of some physical material that is used to harness and focus the magic required to cast the spell. The components are usually figuratively or metaphorically (and often somewhat humorously) connected to the spell being casting, so the Identify spell to determine the nature of a magic item requires a pearl (pearls of wisdom), and a fireball needs a pinch of bat droppings (as anyone who's had bats in their attic knows, the stuff is highly flammable when it dries out). I tinkered with different ways to use the idea in a Basic game without overly complicating things, and here's what I've settled on. We'll start with Magic-Users and similar classes today, and get back to actual material components in a minute, first we need to talk about casting times for spells, another AD&D mechanic I borrow to balance the use of components.

Spell Casting Times:
Usually in Classic D&D, when a spellcaster wants to cast a spell she has memorized, the player just announces that intent and when their turn comes up in initiative, the spell is cast and takes affect.

This optional system does not change that at all, spells memorized for the day according to the rules are cast normally, and 'go off' right when they are cast on the caster's initiative segment.

However, to give the players of spellcasters a little more flexibility in choosing spells for the day, the DM may allow the use of casting times, whereby the player may choose any spell known to the caster as long as they have an unspent spell 'slot' of that level available for the day. In this case, where spells are chosen on the fly instead of selected and prepared in the morning, an initiative penalty of -1 per spell level of the desired spell, to reflect the additional time required to recall and cast the spell, which was only briefly reviewed that morning. If standard group initiative for the party is used, the penalty applies only to the caster, not her allies.

Example: Luna wants to cast a lightning bolt against her enemies this round. The DM rolls initiative for the monsters on a d6, as normal, resulting in a 4. The party rolls a 5 for their group initiative, but Luna is casting an unmemorized 3rd level spell, so she gets a penalty of -3 to her individual initiative, so while the party wins initiative and goes first on a 5, Luna goes on 2, after the monsters.
Since the DM is probably choosing the spells for NPC casters on the fly anyway, this procedure is not used for NPC or monster casters. It is intended solely as a cheat for the players who don't want to be restrained by picking their daily spells before the day begins.

Material Spell Components
Now, what if you want the flexibility of casting on the fly, but don't want to suffer those nasty initiative penalties, which essentially guarantee that higher level magic users casting 5th or 6th level spells will always lose initiative? That's where material components (MCs) come in. 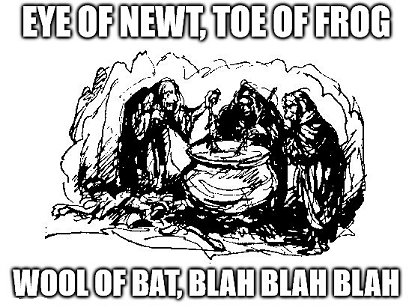 An MC is a small bit of material that serves two purposes in spellcasting. First of all, the metaphorical relation to the nature of the spell being cast helps jog the caster's memory and focus his thoughts on channeling the spell. Second, because of that same figurative relationship to the spell's intended effect, the presence of the material substance helps the caster more quickly gather and focus the magical energy to power the spell.

If the Magic-User* possesses the required material component and uses it to empower the spell, the spell's casting time is negated, allowing the spell to go off on the caster's unmodified initiative segment. The component is 'spent' in the process, and though it may still physically remain in the caster's hand, it is forever drained of its innate magical potency and is unusable as a future material component.

For now I'm only going to suggest specific MCs for the standard 1st level spells in the Basic rules, to give you an idea of the possibilities to guide you in assigning MCs for other spells.

SPELL - SUGGESTED COMPONENT (Metaphorical Meaning)
1. Charm Person - A 4 to 6 inch piece of olive tree branch (symbolic of peace or friendship)
2. Detect Magic - An owl's Feather (symbolic of wisdom and insight)
3. Floating disk - A marble sized chunk of Lodestone or Magnetized Metal (symbolic of the property of magnets to repel other magnets with the same charge), allowing one to 'float' above the other if carefully positioned)4. Hold Portal - A large nail or small spike forged of iron or steel (symbolic of literally spiking a door shut)
5. Light - The intact body (dead or alive) of a firefly (repesentative of the ability to create light)
6. Magic Missile - An arrowhead previously used in battle (representative of the arrow's potential to strike and wound)
7. Protection from Evil - A miniature carved copy of the holy symbol of a lawful or goodly god (symbolic of a god's power to protect his followers)
8. Read Languages - A lense from a monocle or spectacles (symbolic of aiding the ability to read)
9. Read Magic - A scrap of parchment, vellum or paper once part of a spell scroll or spellbook page (representative of magical writing)
10. Shield - A scrap piece of metal from a suit of armor (representative of armor's protective qualities)
11. Sleep - a scrap of cloth from a child's blanket (representative of peaceful 'babylike' sleep)
12. Ventriloquism - A 2 or 3 inch diameter carved or sewn dolls head (representative of a ventriloquists dummy)

MCs for 1st level spells should generally cost no more than 1gp, and if the PC is unable or unwilling to forage for them in the field, can be purchased in most general stores or apothecaries in towns or cities, or from fellow magic-users, though these folks may insist on barter or trade instead of coin.

As the level of the spells increase, the DM is free to limit availability of components to reflect the rarity of more potent substances and items, and the average price/value of the MC will go up, generally as follows:

Improvising Spell Components
Sometimes a specific component may be unavailable, or a creative player may suggest an alternative component from items they find or have on hand. I'm all for this as long as there is a bit of thought and creativity behind the suggestion. A PC could suggest using a stirge's beak instead of an arrowhead for the Magic Missile spell, or a handful of phosphorescent moss instead of the firefly for a Light spell, for example. You should always reward imagination and creative problem solving in the game, so this kind of thing is perfectly fine. I simply require the Magic-User succeed on a simple INT ability check (a roll of equal or less than their INT score on a d20) when casting the spell with the alternate component for it to operate as intended. If the ability check fails, the spell still works, but the normal initiative penalty described above applies.

*Magic-Users, as used in this article, include the Elf class and Wicca/Wokani class option for non-standard 'monster' classes. Other classes with similar spell casting ability may qualify as well with the DMs approval.
That's about it for Magic-Users.
Posted by Darva at Tuesday, October 03, 2017 1 comment: