After a while, the limited lists of magic items in the BECMI rulebooks can get a little boring, and I often end up creating new things to amuse the players. I've found that when you're giving out mysterious, unique things, they usually don't have to be super powerful to catch the interest of the PCs, and minor magics can be just as fun and interesting as relics and artifacts, without the risk of unbalancing a campaign.

So this will be the first in a series of articles featuring some new magic items of low to medium power to spice up the treasures found by PCs in a Mystara game.

Kala Chalk
Now and then, traders returning from the mysterious Honor Island, in the island Kingdom of Ierendi, tell tales of the strange and wondrous magics known to the reclusive magic users there. Less often, those traders have a trinket or two from those mages for the curious buyer with coin to spare.

Kala Chalk is one such item that turns up in the markets of port towns from the Shires to Alphatia once in a while, or in the pocket or pack of some rare traveler. Crafted from a slightly oily powder made from stones found on Mt. Kala on Honor Island, the magic users there (and the opportunistic merchant trying to sell the unique item) claim that it harnesses the power of the volcano in order to protect a person from all enemies!

As any seasoned adventurer in the Known World can attest, "all enemies" can be quite a subjective idea, and those who know the mages of Honor Island will understand that the actual power of the chalk is not what the average folk of the mainland might expect. You see, the folk of Honor Island are notoriously chaotic, and given to mingling and working with creatures considered monsters elsewhere...

Kala Chalk appears to be a 3 or 4 inch stick of 1/2 chalk with a reddish tint and a slightly greasy feel to it. Its power is invoked by drawing a circle on the ground, which then protects those within the circle from aggression by lawful creatures. Those protected gain a bonus of +2 to their AC and Saving Throws against attacks by such creatures, and lawful creatures who enter the circle suffer 1 point of damage each round that they remain within. Creatures forced into the circle against their will gain a saving throw vs. death magic to avoid the damage. The protection granted by the chalk circle lasts for 1d6+3 rounds, or until dispelled.

One stick of Kala Chalk is enough to draw a circle or circles to protect 8 creatures, either all at once or in multiple smaller groups.

Archer's Salve
This thick oily substance is said to be created by elusive elven clerics of the immortal Mealiden in Alfheim, to aid that nation's archers in hunting and battle. It is never sold to non-elves, but turns up once in a while in neighboring nations and can be used by any creature normally allowed to use a bow (but it grants no bonus to crossbow bolts.)

The salve is used by rubbing it into the shaft and fletching of a normal arrow, a process that takes 1d2 rounds to properly complete. Once coated, that arrow is imbued with a bonus of +1 to hit, until used successfully (it can be used again if it misses a target but is retrieved). The arrow also qualifies to hit creatures normally immune to non-magical or non-silver weapons. If not used successfully before the dawn of the next day, the salve's magic fades.

Avrine's New Moon Makeup
Avrine Nimblefoot was Hin "thief" known throughout the lands of Karameikos and the Shires for her daring and good-natured spirit. Hin storytellers who extol her adventures often quip that she was the greatest sneak of all the ages, and when she wanted to remain hidden, even the eyes of the Immortals couldn't spy upon her.

What most Hin don't know, or choose not to mention when telling their tales, is that Avrine had a small but potent arsenal of enchanted items to aid in her exploits. One such go to items in her career was a unique type of stage make up, the recipe for which was developed by the diminutive adventurer herself, with the aid of some forgotten Glantrian alchemist*. Thieves and roguish Hin have since copied the formula for Avrine's make up, and it's not all that uncommon in the realms of Karameikos, Ierendi and the Shires to this day.

Each jar of Avrine's New Moon Makeup contains 1d3 applications, which must be applied over the user's entire face to activate. The sticky, slightly sweet smelling goo is utter black, and once applied it bestows a dark, shadowy countenance to the wearer's entire body. When worn by a Halfling, the makeup raises the chance of hiding outdoors to 20% and hiding indoors to 1-3 on a d6 check. Human thieves (and other, nonstandard classes with similar abilities) may use the makeup, with a lessened effect, gaining a bonus of +5% to their Hide in Shadows checks.

New Moon Makeup is spoiled by exposure to bright light, losing it's magic as soon as the wearer is exposed to sunlight or magical light such as a Light spell.

*Oddly enough, in stories about her, the names of Avrine's collaborators and conspirators are always "forgotten".


Note: In my games, the mundane buying and selling of magical items is extremely rare, but for those who want them, here are the suggested retail values of each of the items featured here:

Kala Chalk, 1 stick: 500gp (The seller will usually be very vague about the specific nature of the item's magic and will emphasize the rarity and difficulty of obtaining the chalk, which is more of a factor in the price than the actual effectiveness of the item.

Avrine's New Moon Makeup: 300gp (on the black market only, the stuff is illegal in most civilized places)


Note: Do not repost or redistribute this material on any forum, website, archive or social media without express prior consent from the author.
Posted by Darva at Friday, September 22, 2017 No comments:

Campaign Mood - Aleena the Doomed, or, How to Annoy the Players with their Hirelings 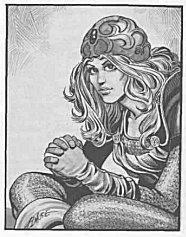 Aleena and the Bargle incident are often remembered with tongue in cheek fondness by many gamers, and for good reason, she's a memorable NPC, it's a cool campaign starter adventure hook, and Larry Elmore's art for her is D&D cheesecake gold.

But, let's look at her dialogue for a minute:

"Greetings, friend! Looking for the goblin? You might - Oh! You are hurt!
May I help?"

"My name is Aleena. I’m a cleric, an adventurer like yourself. I live in the town nearby, and came here seeking monsters and treasure. Do you know about clerics?"

"Well, the goblin went that-a-way, “He came through here so fast I almost didn’t see him. You hit him? Good for you! Goblins are nasty"


"Since you don’t know about clerics, let me explain. Clerics are trained in fighting like you, but we can also cast spells. I meditate, and the knowledge of spells enters my mind. One of the spells I can cast right now is a curing spell, and you look like you need it!"

"feel better? Would you care to sit and rest a bit? I’d like to tell you a few things that you will need to know later."

Um, actually chica, I've got a goblin to slay, thanks for the healing and all though...


"If you didn’t know about clerics, you probably don’t know about magic-users. They are adventurers, like you and me, but they study only spells, and rarely fight. They have different spells than we clerics do, and instead of meditating, they learn their spells from books. There are a few magic-users living in town, but not many."

"If you are attacked by a bad magicuser, you might be able to avoid the magic, but it’s harder than avoiding poison. Spells can be helpful, but they can
be very dangerous, too.

By the way, that looked like a snake bite that I cured. That can be very bad, because most poison is deadly; you were lucky that it didn’t cause more damage. Some other creatures also have special attacks, like poison. Some can paralyze, and some can even turn you to stone by just looking at you - unless you look away in time. And
dragons are the worst! They can breathe fire, acid, or other deadly things. You can never avoid all the damage from their breaths, but you can lessen it if you cover up in time."

Huh. Not only preachy, but a metagamer, this is going to get old fast.

She goes on blabbering in this preachy, almost condescending manner right up until ol' Bargle shows a little mercy on strong fighter's mental state and fries her with a magic missile.

Now, of course, this type of hand holding is probably useful to someone who is picking up D&D and the heroic fantasy genre as a whole for the very first time, but to experienced players, when read to them as npc dialogue, it gets irritating, fast.

And that's a good thing.

Especially among low level parties, the temptation to use hirelings as party crutches can be a problem in a campaign. "What, 6 of you and noone rolled up a cleric? Great, I supposed you expect me to run one for you, so you have a paramedic tagging along while I'm trying to run the monsters, npcs, etc"

Yeah, sometimes you have fewer players than the game assumes, or PC attrition during a campaign or a player absence from the game makes hirelings and other tag-a-long NPCs useful, if not required, but, if your players begin to lean on them too much, getting lazy or careless because they know the hireling will bail them out....

Make them like Aleena. Annoy the living hell out of your players every time they call on the healer or torchbearer to do their job. You don't have to go as far as having the hired thief steal from them, or the hired cleric refuse to heal those not of his alignment, just have the thief be an arrogant prick, have the magic user be overly intellectual and condescending of their mistakes and silly ideas, have the cleric preach endlessly about the glory of his faith and the sins of the players, have the fighter be a loudmouthed boor who never fails to break down parleys with insults hurled at the enemy.

You get the idea. Eventually the party will get tired of the BS and release the npc from employment, or murder him in his sleep...
Posted by Darva at Friday, September 22, 2017 No comments: