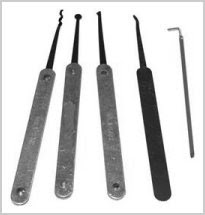 Avrine Nimblefoot is a legendary figure among the folk of the Five Shires and western Karameikos, especially the Hin. She lived about 50 years ago, and was a daring swashbuckler of a lass, living a life of wild adventures and daring deeds. Among the stories told about her are the tale of how she retrieved the jeweled crown of Penhaligon from a bugbear bandit who accosted the Baron on the Road on a trip to Specularum for a tourney, and a wild yarn about a game of dice with the gods which lasted the entire harvestfest holiday week and earned Avrine the enchanted lockpicks that now bear her name when she tricked the god into admitting defeat (even though he was obviously winning, the storytellers add with a knowing wink and grin).

Avrine's lockpicks are a set of exquisitely crafted thieves tools made of platinum decorated with diamonds of various colors. When used by a non-thief, they grant the user the ability to Open Locks af if he were a thief of 1/2 his current level. Example: Giano is a 4th level halfling. When using the lockpicks, he can open locks as if he were a 2nd level thief.

The lockpicks are a unique item, and worth about 5000 gold pieces if sold.
Posted by Darva at Monday, November 27, 2017 5 comments: