Good D&D campaigns always need interesting NPCs, and Classic D&D caters to this need with the excellent Shady Dragon Inn supplement, a collection of myriad pregenerated characters with thumbnail sketches of their personality and background to get the DM's imagination going. For those who lack access to that book, or who want some NPCs tied a little closer to the Known World setting, I present the first in a (I hope) ongoing series of articles introducing a handful of personalities to use in a game. Whether they act as contacts, hirelings, villains, or even replacement PCs for players whose luck is less than ideal is up to you.

Keeping with this month's "Hinuary" theme, here are 5 Hin from around the Five Shires to add to any campaign. 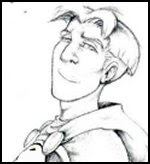 Liam is short, even for a Hin, standing just an inch under 3 feet, but he makes up in spirit what he lacks in stature. Always a gung-ho soul with little thought of fear, he's a hero of sorts in Ober's Mimbur, having once killed a large brown bear that had wandered into the field behind the Grinning Elf tavern single handedly by perching atop the tavern's roof and pelting the beast with sling stones. He collected one of the bear's paws and had it turned into a necklace that looks comical on him given his small size, thus gaining the nickname Bearclaw among the town's residents.

Liam will gladly join an adventuring party, given that he sees enough risk in their endeavor to make it "fun". He's loyal and enthusiastic, not given to complaining about long marches or sitting watch at camp, but his penchant for gambling and tendency to react to encounters with a volley of sling stones, even when a more subtle approach might be better, may cause the party some minor headaches now and then.

Liam owns a small cottage in Ober's Mimbur, and will gladly offer it to PCs who enlist him in their party or befriend him in town, since lately he's taken to camping in the hills around town, searching for Ober's lost treasures (see D&D Gazetteer 8: The Five Shires for details on this lost treasure hoard), a place that most other folk in town are terrified to even approach given the tales of ghost sightings near the ruin. Liam is eager to find the treasure, and the dungeon rumored to contain it, and has started trying to encourage adventurers who pass through town to join him in "poking around a bit," but so far, he hasn't succeeded in rallying help.

If encountered outside Ober's Mimbur, Liam will generally be on his way home, fresh with stories of his latest adventure, or may be in the company of other NPCs, eager to enlist the party in aiding in whatever quest they are off to undertake. 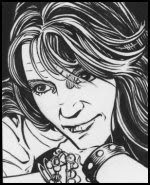 Sherl's an imposing Hin, fully 4 feet tall and well muscled, reflecting her early life as a mason's daughter. Although her first couple adventures, exploring caves in the Achelos Woods with some other adventurers from Wereskalot, went well, earning her the magic dagger she readily brags about to anyone who will listen, she hasn't had any luck joining a real adventuring party, and is eager to do so. For now, she's reluctantly helping her father (Rand Watcheye) with his masonry business and tending to her young brother, since their mother passed away 3 summers ago from a nasty bout of the flu. In Wereskalot, she'll be encountered mostly at night, frittering away the meager pay her father gives her on Rockhome mead, which she has a notable weakness for, and attempting to latch on to any adventuring party she comes across. During the day, she might be found at her father's workshop (which doubles as the family home) or out running errands.

Outside of Wereskalot, Sherl will be encountered with her father and kid brother, attending a fair or festival around the Shires or Karameikos, or meeting with miners about new supply contracts. Rand will be annoyed at seeing her run off with adventurers, and although he's no more than a nuisance, he'll hold a lengthy grudge against the PCs if they recruit her, hassling them a bit whenever they visit Wereskalot, even if she eventually moves on or goes home.

Sherl is a capable fighter and stalwart companion though, if perhaps not the brightest girl the PCs might meet. She dreams of a heroic career adventuring, and longs to visit Shireton one day to see the "big city". She then hopes to settle back in Wereskalot with a wealthy husband, as long as he isn't a mason, she resents that life. 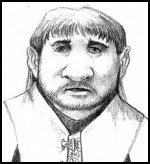 Ronwyn is a quiet, grim fellow, unhappy with his life as a guard on Tothmeer's docks, but lacking the ambition to do much of anything else with his life. He's known around town as one of the few Fangs (Militiamen) assigned to dock duty that can't swim, and jokingly called Fish by those who know him.

Adventurers who try, for some reason, to recruit Ronywn will be met with a doomsday speech about the futility of trying to do good in the world, and only the most outrageous offers of pay will give him the inclination to run off on an adventure. He's grudgingly friendly with his fellow Fangs, but few who know him really trust him. When not on duty or at the dockside Fang station sleeping, he can usually be found at the Riverwalk tavern nearby, playing in a quiet game of dice with other Fangs, or just drowning his sorrows in a glass of brandy. He's somewhat of an oddity in the Shires, proclaiming an intense dislike of beer and ale.

Asking about the fine leather armor Ronwyn wears is a quick way to earn his (brief) admiration, since he is extremely proud of it. The story around town is that when Lora, the now teenaged niece of Sheriff Sildil Seaeyes, was a youngster, she was accosted by thugs while playing on the docks with some friends. Despite being outnumbered and unarmed (he was on the way home from the tavern and out of uniform), Ronwyn lept to the rescue, leaving the troublemakers clinging to a small raft floating in the harbor. As a reward for his courage, Sheriff Sildil held a feast in Ronwyn's honor, and presented him with the handsome suit of leather armor. Ronwyn loves to brag about this, and PCs trying to get in his good graces will go far by flattering him on this, as well as buying a round of drinks or two "to toast the hero".

Ronwyn's secret
Fish isn't above being bribed, in fact, it's one of the few things in his miserable life that makes him feel important. PCs up to shady business on the docks would do well to get to know Ronwyn for this reason alone.

Caution is wise though, Fish is only loyal to hard coin, and rivals, or authorities, willing to beat the PC's bribe will find themselves quickly betrayed by the dour little Hin.

Giana is a self proclaimed master burglar, usually found around the shadier taverns in Sateeka, selling her pilfering skills to the highest bidder. While generally friendly and easy going, she is pretty cocky about her abilities and stubbornly overconfident, often accepting jobs she is under-qualified for and getting herself into a world of trouble. She's been lucky so far though, escaping harm's way and landing only short stints in the jails of Karameikos and the Shires.

Giana will gladly join a party that can meet her price (left up to the DM to reflect the economics of the individual campaign), but she bores easily, and if there isn't enough action and danger, she's likely to wander off in search of thrills elsewhere.

Gee is pretty good at what she does, but she's got a little history that her new friends will have to contend with sooner or later. About a year ago, she took a job looting some artifacts from a College of Magic in Specularum for the infamous magic users Bargle, in the Black Eagle Barony. Although she successfully retrieved the books she was hired to, she decided the Baron wasn't paying her enough, and sold them to a rival buyer (an anonymous magic user in Luln) for 3 times the price. She is hunted by agents of Bargle (usually magic-users, devise them to rival, but not overpower, the party), who are fairly nasty folk and have no qualms about roughing up the party to get at Giana. 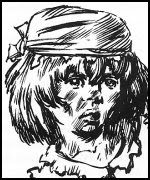 Gerro is a little old for a vigilante, but he's still spry and crafty, and spends his days patrolling the streets of Shireton with his merry band of fellows, which he has affectionately dubbed "The Defenders". For many years, banditry in the city was a major problem, with Jaervosz Dustyboots, there's still a few bands of hoodlums out making mischief. Gerro, a veteran of the Fangs, has decided to continue his patrols, and has attracted a band of 15 to 20 (the number varies as members come and go, or perish in their "duties") to help him.

PCs will likely first meet Gerro and his band if they are accosted along in town. Within 1d4+2 rounds of combat ensuing with bandits, Gerro and 1d6 of his men (err, Hin...) will charge into the battle, aiding the PCs (unless of course, they are the bandits...) Goodly PCs will find Gerro to be a gruff but useful ally, devout in his self imposed duty to protect the people of Shireton from villainy.

Gerro is a grizzled veteran of many adventures in and around Shireton, and knows the city well. He'll be reluctant to leave his Defenders alone for long, and wont actually join the party for any missions away from the city, but he can serve as a handy contact when the party is in that area, being well aware of pretty much every rumor that spreads on the streets and alleys of the town..

Gerro's also a close personal friend of Sheriff Jaervosz, and will gladly send a letter to him vouching for them if they are acting in what he sees as the best interest of the city and the Shires and need his assistance.