The Mind of the Mule (or, The Wise Ass of Eltan's Spring)

One show I like to have on for background noise is Travel Channel's Mysteries at the Museum, a random collection of interesting stories connected to obscure items from the artifact collections of different museums. The other night I was working on reports for work while a 'marathon' of reruns played in the background, and one fun story caught my attention.

Lady Wonder, the mind reading mare of Richmond, Va. tells the story of horse whose seeming ability to not only understand and communicate with humans but also possess prophetic psychic abilities enthralled 1920s Virginia. Although supposedly debunked by scientists of the time, the story got me thinking about how to use the idea in my game. Here's what I came up with.

The Mind of the Mule
While resting at the Crock & Goblet tavern in Eltan's Spring, or even one of Threshold's alehouses, the PCs hear strange rumors of Juliana Ironshoes, a Hin mule breeder who has a small ranch north of Eltan's Spring near the woodbridge, where she and her sons raise mules to sell to folk around Lake Windrush. The Ironshoes mules are known as sturdy and reliable, though unremarkable in intelligence, but recently visitors to the ranch tell wild tales of Miss Petunia, a young molly (female mule) who can tell the future!

As the stories go, the molly is kept in a comfortable barn on the ranch, where gammer Juliana charges visitors a Royal (1gp) to see her and ask her a question. Petunia then scratches her answer in the dust of the barn's floor, using the old Traladaran runes, which the eldest Ironshoes son, Lorello, then translates for the patron. 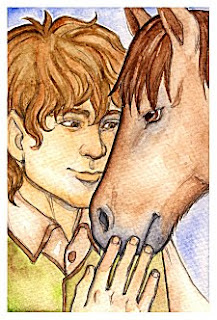 PCs who investigate the matter discover that the stories are absolutely true! Upon visiting the Ironshoes ranch and inquiring, Juliana leads the party to a small but sturdy barn among the oak trees near where the woodbridge crosses the small river. The double doors on the front of the barn each bear a bright, cheerfully painted symbol, one of the Immortal Faunus, patron of Centaurs and equine creatures, the other of the Church of Karameikos. Juliana then requests a donation of one Royal (1gp) from each visitor to help with Petunia's upkeep, since she feels it wwould be an affront to Lord Faunus to sell the blessed beast like the other mules she breeds. If pressured on this matter, she explains that she also donates half of the coins donated to Petunia to Patriarch Sherlane at the Church in Threshold, to help with "feedin' and learnin' the poor orphan chillun' of that burg". If the PCs get overly rude or violent, Juliana whistles loudly, summoning a number (equal to the number of PCs + 2) of her hired hands (treat as normal Halfling 'monsters' per the Basic rulebook to calm things down.

Once inside the barn, the PCs meet Lorello, a tanned and healthy looking Hin teen in clothing typical of a farmer, brushing and feed fresh hay to a young molly with pink and green ribbons in her mane. A few coins and minor knick knacks (valuing 1d6gp total) are scattered among the hay at the mule's feet. Lorello instructs each party member with a question to politely and clearly ask Petunia their question, upon which the mule scratches her hoof in the dust and hay, clearly spelling out old Traladaran runes. If noone in the party reads that forgotten script, Lorello translates.

Petunia's answers are generally correct, Roll 1d6:
The base chance for a false answer is 2 in 6, so if a 1 or 2 is rolled, the answer given in incorrect. The DM should roll this secretly, neither Lorello or the PC asking the question will immediately know the nature of the answer.
For characters who are either Centaurs*, Neutral or worshippers of Faunus, the chance for a false answer drops to 1 in 6. A character who qualifies as all three of those options has no chance for a false answer.
In either case, true or false, Petunia's answers are fairly vague and open to interpretation, unless the die roll results in a natural 6, in which case the answer is fairly clear and direct. For all results, the wording and accuracy of the answer is left to the DM's discretion to suit the campaign story.

As one might expect, rumors of a magical fortune telling mule are bound to attract nefarious persons wishing to control the beast's power. Bradenial of Darokin (Chaotic human Merchant, level APL*+2) is no exception. Outcast by his Darokini peers for dishonest business practices, Bradenial has taken up residence in Threshold for now, where he conducts shady and even outright illegal business as a fence and agent for clients too disreputable to show themselves in public at the Gold Dragon Inn, a popular gathering place for adventurers in the city. Bradenial dreams of the deal that will restore his reputation and allow him to return to his comfortable life in Darokin, and a magical prophetic mule to amuse his peers seems like the perfect score.

Bradenial visited the Ironshoes ranch, perhaps the same day as the PCs to allow them to make the association between him and the coming crime, where he was escorted away by Juliana's hands after refusing to pay the donation and threatening her. After returning to Threshold with a growing grudge, he hired a band of brigands he'd contracted for some minor "legbreaking" and other intimidation jobs in the past. Last night, under the cover of a strong, cold rain, Bradenial's thugs broke into Petunia's barn and absconded with her, causing an uproar in Eltan's Spring, where the PCs are when Lorello contacts them at the Crock & Goblet Tavern in a panic, begging them to help rescue the mule before she comes to harm, which he says is inevitable.

Lorello explains that for reasons known only to Lord Faunus, Petunia's gift works only in her barn, where she was born and raised, being too small and frail for the normal training given the other mules. Lorello fears, correctly, that the thugs will become enraged when they discover that Petunia's gift is "gone" (though it will return if she's brought home to her barn) and kill the poor molly, who is useless as a mount or pack animal. On behalf of his mother, he offers the party 150 Royals, the amount of coins in Petunia's stash not set aside for Baron Sherlane. If the PCs are hesitant or ask for more, Lorello reluectantly offers them all 300gp, as long as the "swear solemn-like to make right with the Church" later. Either way, Lorello only has 1d4 x 10 gp on him at the time to offer up front, the rest will be paid upon Petunia's return.

If the DM feels the party could use another swordarm, Lorello's younger brother Stevan (Normal Halfling 'monster', short sword, short bow) comes into the negotiations and offers his service, free of charge.

Tracking and overtaking the thugs is rather easy, since they are dragging a scared and angry mule along with them. They offer to betray their employer for the amount of 500 Royals, twice what he is paying them to deliver the mule. If that is refused they attempt to continue along the road, fighting only if blocked or threatened. There are a number of Brigands (as the 'monster') equal to the PCs, including Stevan if he's there, plus 1d4.

If successful in saving Petunia, the party is paid, and earns the friendship and hospitality of the Ironshoes, their hired hands, and the folk of Eltan's Spring. Bradenial is another story, after 1d8 days have passed, he will confront them in Eltan's Spring or Threshold. If he feels he has a reasonable chance of defeating the party and taking their valuables, he will attack them immediately, using his Merchant magic in whatever way seems best. If the DM prefers, he may simply curse and threaten the party, slinking off to return at some point later to harass them.


*Centaur PCs are explained in the Creature Crucible: Tall Tales of the Wee Folk sourcebook.
*APL refers to average party level, just add up the total levels of all PCs and NPCs (discarding minor nocombatant hirelings) and divide by the number of PCs for a rough measure of their 'total hit dice' for assigning monsters to challenge them.

If the party looks into it, perhaps by asking Petunia herself, her gift is a result of being an equine born in that barn, which was unknowingly built upon the ancient, forgotten burial site of a Traladaran Cleric of Faunus, who simply communes with the world through Petunia in order to aid good intentioned individuals in the quests and toils. 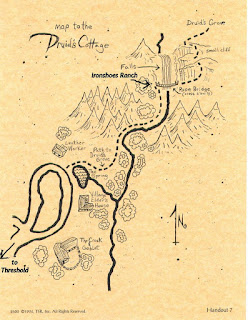 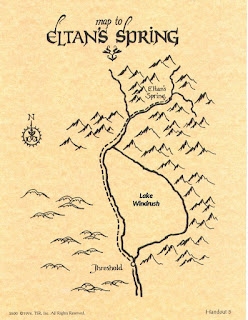